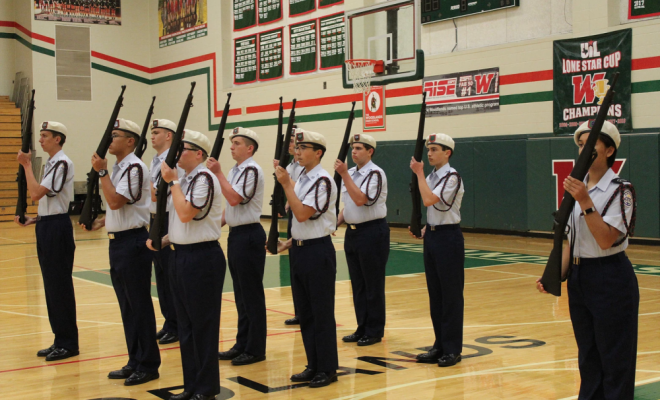 THE WOODLANDS, TX – For the second year in a row, the academic team from The Woodlands High School’s TX-20062 Air Force Junior ROTC has advanced to national finals in the Joint Leadership Academic Bowl.

After advancing through two phases of online competition, juniors Grace Baldwin, Jeanne Gancel, and Zack Walker, and sophomore Ethan Harte, will compete at the Championship event in Washington, DC. The 2019 U.S. Air Force JROTC Academic Bowl Championship will be held on the campus of The Catholic University of America, June 21-25, 2019. This event is sponsored by the U.S. Air Force JROTC and is conducted by College Options Foundation.

The Woodlands High School’s JROTC team earned top scores out of the 330 AF JROTC teams that competed from around the world. Critical to the team’s success were alternates Tyler Clough and Fernando Peraza Nass, who competed along with the primaries during the first two rounds, as well as helped the traveling team prepare in the months leading up to the national finals. The team is one of only two teams from Texas and sixteen total Air Force JROTC Academic Bowl teams worldwide to advance to the National Academic Bowl competition, which includes an all-expense paid trip to the Championship event in DC.

During the two fast-paced preliminary rounds, students were tested on their knowledge of JROTC curriculum, English, Math and Science. One of the main goals of the JROTC Academic Bowl is to prepare students for state exit/graduation exams as well as college entrance exams, such as the SAT and ACT.

Last year, the team advanced to the national finals for the first time in a decade, and after multiple rounds of competition, emerged as the top team in Texas and sixth in the nation.

College Options Foundation is a nonprofit organization dedicated to enriching the academic development of high school students and assisting them in their preparation for higher education. Using academic competitions, college exam study guides, college admissions tutorials and personalized counseling, College Options Foundation has assisted the nation’s JROTC cadets worldwide for over a decade.