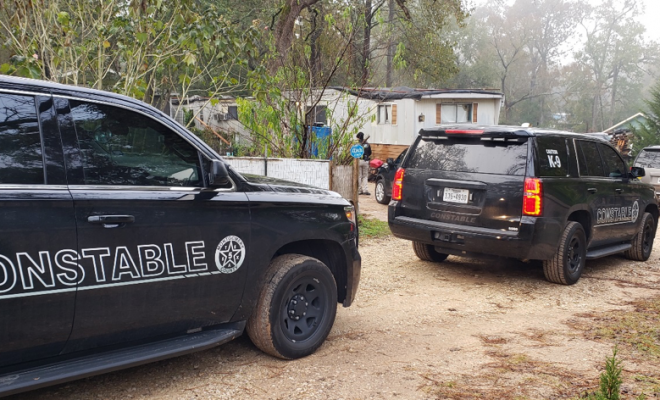 Self-proclaimed King of the Hollow gets de-throned

On November 15, 2019 Deputies with the Montgomery County Precinct 5 Constables Department conducted a search warrant at 36835 Pine Bark Ln. located in Magnolia within the Hazy Hollow Subdivision.

Deputies received information about drugs being sold from the residence and opened an investigation.  The main source of narcotics was identified as Rogelio Valencia a 48 year old Hispanic male from Magnolia that had previously self-proclaimed himself as “King of The Hollow.” Valencia had previously been arrested and convicted on prior drug charges and was released from prison in 2018.

After a search warrant was signed, Deputies went to the address and executed the warrant. At the residence with Valencia were three other subjects identified as Renee Graves (47), Adam Himes (39) and Brandi Baxter (42).  Once inside the residence Deputies seized approximately 10 Ounces of crystal methamphetamine and approximately 1 ounce of powder and crack cocaine along with a large amount of currency.

All four subjects on location were arrested and transported to the Montgomery County Jail where they were released to jail staff.

Baxter was charged with Possession of a Controlled Substance (Penalty Group 1) 4-200 Grams a Second Degree Felony.

Himes was charged with Possession of a Controlled Substance (Penalty Group 1) less than a gram which is a State Jail Felony.

Constable Chris Jones comments: “My Deputies did a fantastic job on this case.  We will continue to combat drugs and target those who are spilling them into our community.”

If you are aware of any illegal activity please contact the Precinct 5 Constables Office at 281-259-6493 or visit our website CONSTABLE5.ORG to provide an anonymous tip.