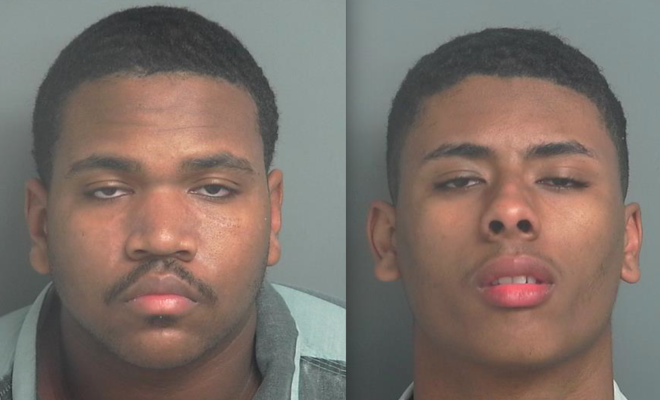 On May 25, 2018, Judge Patty Maginnis of the 435th District Court of Montgomery County, Texas, sentenced Patrick Jacorkey Wilson, 19, of Tomball, and Cameron Cordell Moore, 19, of north Houston, to 40 years each in the Texas Department of Criminal Justice for their roles in the February 23rd, 2017 Aggravated Robbery of Pappas BBQ on I-45 in Oak Ridge North. In the evening hours on that date, some 30+ customers and employees were in the restaurant when three individuals came in the front door to rob the location. As employees tried to flee to safety, Defendant Moore, wearing a camo-colored hoodie, jumped the counter with a gun in his hand and went to the manager’s office where he stole money from the office safe. Defendant Wilson, wearing a dark-colored hoodie with a gun in his hand, was seen on camera at the cash register and acted as a go-between in assisting Defendant Moore and the third aggravated robber. That suspect was seen wearing a white hoodie and carrying a gun while individually robbing store customers.

After taking cash from the store safe, store register and store patrons, all three fled the store into the parking lot. Defendant Moore fired a shot into a pickup truck containing a couple of store employees. The third robber allegedly fired a shot into the grill of a truck containing a driver headed home. Police officers with the Montgomery County Sheriff’s Office, Shenandoah Police Department, Montgomery County Pct. 3 Constable, and Oak Ridge North Police Department responded to the scene and were able to apprehend the three suspects. Wilson was found just north of Pappas and Moore fled into the Oak Ridge North residential area before being captured. Cash was found on the three suspects and their individual hoodies and handguns were all recovered.

Wilson and Moore each pled guilty to three counts of Aggravated Robbery and received three 40 year sentence, to run concurrent for each defendant. The 40 year TDCJ sentence for Aggravated Robbery means Wilson and Moore will not become eligible for parole until each has served at least 20 years. Eligibility for parole does not guarantee parole. Prior to their arrests for the Pappas robbery, both Wilson and Moore had never been arrested as a juvenile or an adult. The third suspect’s cases are currently pending in the 435th District Court.

Chief Prosecutor Jim Prewitt said,“Montgomery County citizens deserve the right to go out for a nice meal with their family and friends without having a gun put to their face and without having their lives put in danger. This Court’s sentence acknowledges how truly dangerous the actions of Moore and Wilson were. Thanks to swift action by Oak Ridge North PD and officers from other agencies, Moore and Wilson now face many years in prison for their violent behavior.”