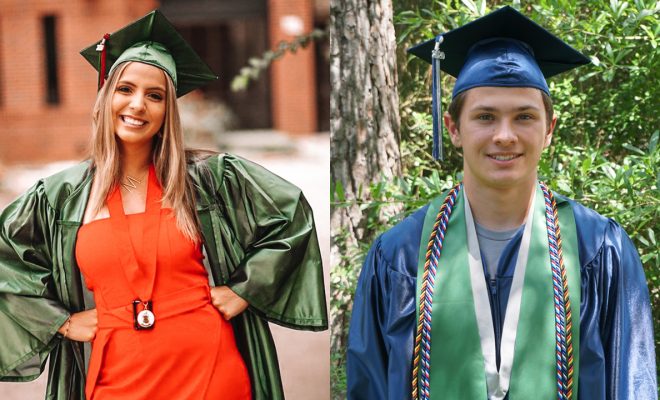 THE WOODLANDS, TX – The Howard Hughes Corporation®, the developer of the award-winning master planned community The Woodlands®, has awarded on behalf of the Howard Hughes Executive Club two scholarships for $2,500 each to local high school graduates to pursue their college endeavors. These two scholarships are part of the 14 high school scholarships awarded this year, an education tradition which the developer has funded since the 1980s.

The Howard Hughes Executive Club recognized the entrepreneurial spirit of two high school seniors in The Woodlands with scholarship opportunities. Criteria included an essay with a topic of developing a business in The Woodlands. The scholarships were judged by educational staff.

The Woodlands is a very special and unique place to live. It is a place where humankind and nature coexist harmoniously. Not a day goes by when I do not see an egret or a doe. I often hear the rat-a-tat-tat of a woodpecker in the mornings, perched atop his majestic pine, or see the scampering of a raccoon, armadillo, or opossum while sitting in my backyard at dusk. It is a privilege to live in a community that honors the ecosystem within which we live, as well as its inhabitants, be they furry, feathered, or scaled.

It is a well-known fact that we, as residents, take pride in being surrounded by natural reserves, which we are able to enjoy whether on foot, or by bicycle. What we lack is a way for residents to become immersed and educated on the flora and fauna that also make The Woodlands their home. We are in need of a foundation, where we could learn more about our environment, perhaps in cooperation with currently existing rangers and researchers from the various universities and organizations, who have already set-up shop in the Sam Houston National Forest. The foundation would be something similar to an indoor/outdoor museum, or something seen at the zoo or a biological preserve, where interactive educational resources would be available to the public, instructing them on habitat preservation and restoration. There may even be a rehabilitation center for wildlife, where injured animals are nursed back to health before release back into the wild, all the while being safely observed by the general public. This foundation would be a non-profit, hopefully run by grants, once established, staffed by experts, and supplemented by volunteers, or docents, allowing the average person with a passion for nature to get involved. I foresee prospects for class field trips, family outings, and summer camps, as well as increased opportunities for researchers and environmentalists to continue to find new and more advanced methods to maintain and protect this forest we all call home.

This concept is something I have been thinking about since my family and I moved to The Woodlands six years ago. At the time, I was already volunteering at The Houston Zoo through their Teen Zoo Crew Program. I started out as a Junior Camp Counselor with Camp Zoofari, moved into Junior Zoo Keeper with the Hoofstock Section, and finished out as a Naturalist. The lessons I learned throughout the program over those four summers ignited within me a passion for conservation. I was also inspired to see what I can do in my own backyard, with regards to preserving the greenspace that runs in and around our tree-lined villages.

What would The Woodlands look like without the colossal and abundant trees our community is known for? The same trees that provide such a safe haven for a plethora of inhabitants. What would it be like to not see the squirrels leaping from tree limb to tree limb, or to not hear the chirping, singing, chanting of the many different species of birds? These sights and sounds are what make living within The Woodlands such a blessing, and it is up to all of us to help preserve this magical place, so that generations may continue to enjoy cohabitating with nature, and nature, with us. The only way to successfully achieve this is to ensure that we are all educated and invested in our environment, and that we understand our own roles within the ecosystem. An educational foundation based on conservation, and open to the public, is a key building block to this success, and it seems perfectly aligned with what our community model embodies.

As the title suggests, this business concept is based heavily around composting services, though it has a much more profound effect on the local economy and environment. Food waste is a prevalent issue in the United States, with recent reports estimating that over 11 million tons of food waste is generated annually in the continental U.S. alone. Unfortunately, almost all of this waste is shipped directly to landfills, a practice that has already been proven to be extremely harmful to local ecology. This model would aim to collaborate directly with local businesses to responsibly ship and repurpose their food waste to a company run composting facility.

With a relatively small property and a surprisingly small amount of equipment, large scale composting could be used to transform seemingly useless scraps into environmentally friendly fertilizers and soil compounds that can be sold both to local gardening businesses and private consumers. With the population’s growing concern over the use of artificial fertilizers compost sales have been rising nationwide and presents an alleyway by which this business could earn the majority of its profits.

The first major hurdle would be to incorporate businesses such as restaurants and grocers into the model, but there are reasonable incentives to help convince them of its value. Switching to zero food waste business practices have already been proven to reduce operating cost, and in some areas there are even opportunities for tax incentives. Furthermore, with the growing public awareness of our environmental footprint a zero food waste policy can be an effective advertising tool.

A functioning start-up would take serious logistical planning, but given the public support for environmentally friendly practices it is not at all unreasonable to see major success in this field. Hopefully as these ideas gain even more traction we will see a significant reduction of wasted resources and perhaps make our country cleaner for generations to come.